On a casual Saturday trip to Home Depot in Aurora, Colorado, my husband and I witnessed a woman in an Uber car brutally beating her son in front of two other kids. I sprung into action and approached her asking her if I could help, yet she relentlessly continued pummeling the young man as though I wasn’t even there. I started banging on the roof of the car demanding she stop. My efforts went unnoticed. It wasn’t until another witnessed announced she called the police that the woman very calmly crawled off her son and got behind the wheel of her car and drove away. I took the initiative to take a picture of her license plate number and when the Aurora police officers were taking our statements they apologized claiming because she was from out-of-state, they had no way to track her. Within minutes of reviewing the photo it became clear that the car belonged to an Uber driver. Amazing a mere civilian could find a clue faster than two trained police officers. If this woman was assaulting a person, like a judge or politian, my guess is these “peace” officers would have made a greater effort to figured out how to execute an all-points bulletin that would have nabbed her faster than she could reach her destination. When I asked whether they could announce over the police scanner the make and model of the car with the license-plate number, the police officer acted as though it would be a hassle. I am a mandatory reporter and have spent a lifetime training families not to be violent and I genuinely wanted to assist. But it was to no avail. I trusted the system would have done something to protect these kids, but the response seemed uncaring and apathetic. It is no wonder young people are shooting up schools and joining gangs everyday. I feel I failed these children because I didn’t drag this woman off her son and make a citizen’s arrest. The headlines report violence daily and yet we are unwilling to do our due diligence to protect our children. 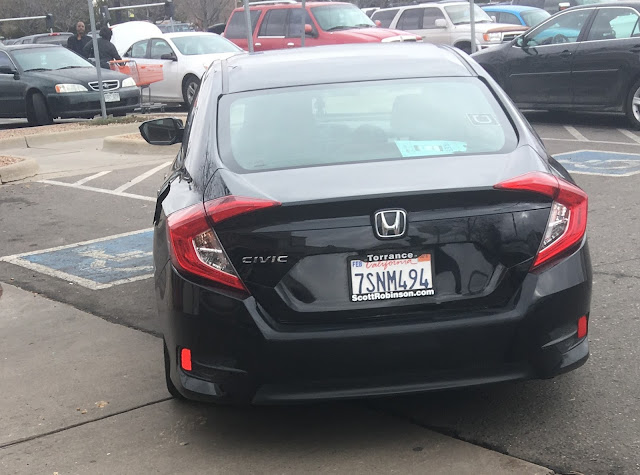 In case I’m wrong, as I sometimes am, I’m willing to concede and apologize if the police really do have their hands tied and truly are unable to assist our community. So to provide support, I’ve decided to put the picture of the car online and, with your help, perhaps you can help the Aurora Police Department by calling in an anonymous tip or maybe call your contacts at Uber and let them know one of their employees is a child abuser.
Posted by Christina M. Dalpiaz at 3:21 PM